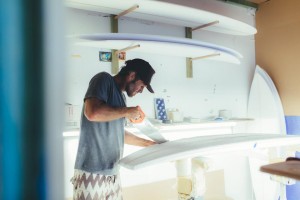 Joel does not want you to believe he’s going to reinvent the wheel, especially with the influence of the Fitzgerald family had in the world of Australian surfing. With his enigmatic surfer spirit, he became a designer of surfboards drawing on the past to create the future bases of surfing.

With his brother Kye, he has always stood out from the mass by a surf and different shapes. Open to new designs and experiments, it was revealed the greatest number of by this works with brands like DEUS and famous surfers looking for alternatives surfboards.
Supported by his wife Chrystal, and followed by shapers such as Rich Pavel, Joel supports ecological movements against the killing of whales, coal mining.