Watching Joel Fitzgerald streak across an unknown Indo wave on an untested single-fin seems the most natural thing in the world. His first wave is a smoking double barrel. The show just evolves from there. Forget that the wave is sectiony, the boards are tricky and the whole place is completely new to him… He was born to do this. Son of The Sultan.

Joel first walked the track out to Uluwatu when he was 12 years old. Bali in 1985 was a galaxy removed from the Bali of today. No tours buses back then. The trail, the cliff, the cave… it was all still a cosmic experience. “I was pretty much shitting myself going through that cave the first time,” he says. “But dad was there and he made us do it.”

“Dad” is Indo pioneer, single-fin legend and Hot Buttered shaper Terry Fitzgerald. They called him “Sultan of Speed.” Joel and his brother Kye spent their formative years riding single fins, exploring outer Indo with TF and visiting the North Shore every winter… basically living the surfing lifestyle they were born into. When they came of age, they grabbed their thrusters went off in search of WQS glory. Seven or eight years of merry-go-round travel later, they got off the roller coaster wondering what happens next.

Some of Dad’s old boards were lying around the yard. The rest was only natural. Shaping singles… exploring Indo… living in Byron… If The Morning of the Earth ever comes knocking, Joel will be there to answer the door.

SURFING: What led you back to riding and shaping single fins?
JOEL FITZGERALD: Sometime around 2000, my older brother Kye started riding dad’s original Hot Buttered boards. It became all he would ride, to the point that he even got to a WQS semi-final riding an original 1972 Drifter board. We both started digging up all of dad’s old collection – whatever was under the house or in the rafters or sitting around the factory and just riding them until they broke. We did that until there were none left. 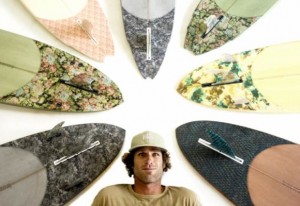 Was Terry upset about you kids smashing his collectable quiver?
Not at all. He made boards to be surfed. He just wanted them to be making people happy.

What was the allure of riding single fins?
They were just so trippy, and there was there was this weird prestige to them. In some ways, it was just the challenge of it that drew us to them. Turning and keeping them in control was so much harder, but once we figured it out it became totally natural. It turned into a love affair. It was so much more fun than riding our thrusters.

Why? What’s more fun about it?
Partly because it’s harder. But also because you can put more power into the board, move more water. You can rip the back out of a wave and it’s not going to spin out on you. Watching Kye ride them was always a huge inspiration. 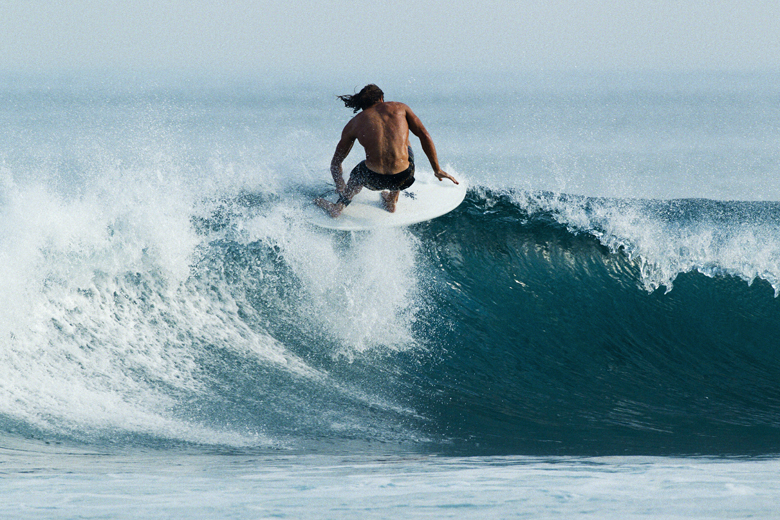 Is being a single-fin shaper a way to differentiate yourself from other shapers?
Well, I don’t just shape single fins. I’m comfortable shaping anything from 4’11” to 9’6”, and I’ve built up a nice collection of templates. But I do enjoy the single-fins. It’s funny to think surfing spent nearly 20 years stuck in the mindset that thrusters were the only boards worth riding. That was a tough time for shapers to distinguish themselves when everyone was making virtually the same thing. It’s been slow going, but we’ve spent the last decade evolving back to shorter boards, new fin shapes and design concepts. There a lot more room for experimentation these days.

Are your single fins an evolution or flashback?
Probably a bit of both. A lot of my templates are still pretty true to my dad’s boards or Gerry Lopez or Dick Brewer designs. Because when you measure up some of those old shapes you realize just how much effort they put into those original designs and formulas from that era. I just like riding them because you can paddle in early, pull some different lines and use some different body mechanics. It’s all part of the experience.